In Puerto Nuevo, the self-described “Lobster Capital of Baja” you can choose from dozens of restaurants serving up langostas (pan-fried lobsters.) According to tradition, the lobsters are pan-fried so that the meat stays soft and tender. Beans, rice, and homemade flour tortillas are served on the side. Puerto Nuevo Baja was founded in 1956 with the opening of Puerto Nuevo II Restaurant, which is still one of the most popular restaurants in Puerto Nuevo. Today Puerto Nuevo is home to over 30 restaurants all serving the same thing… LOBSTER! Almost a million lobsters are served in the Rosarito coastal area each year. “Puerto Nuevo-style” is now a world-famous synonym for the exquisite style of cooked lobster offered in local restaurants. Mexican lobster in Puerto Nuevo is a long-standing tradition for those visiting from the states and is a real favorite for San Diegan’s who can get there within 45 minutes from most parts of San Diego. In Puerto Nuevo Mexico you can enjoy incredible ocean views in most of the restaurants, however make sure you don’t judge the restaurants by appearance alone or you might miss out. Puerto Nuevo, locally known as the “Lobster Village” is a great little village with plenty of interesting shops, arts, and crafts. It is indeed a perfect quick getaway destination with amazing lobster!

In 1954 Rosa María Plascencia’s father came to live in what’s now the famous lobster village of Puerto Nuevo. He came because he’d heard there were lobsters there lots of them. There were! A year later Rosa María’s mother’s family came. The two young people met, fell in love, married and built a tiny house across the street from what is now the family restaurant, Puerto Nuevo II. Occasionally some Americans would show up and ask the men to take them fishing in their pangas. When they came back in, they’d join the Mexicans in a big meal. As is typical still today at fish camps up and down Baja, no money ever changed hands. The Americans gave soda, ham, sandwiches, cookies, candy and whatever else they had to spare in return for the fine food. In about 1956, Rosa María’s father sent to Guadalajara for his brother and sister. They came and joined in the fishing and cooking. A few more families migrated to the area. One built a little stand next to the bus stop, where the welcoming arches are now. They sold sodas, snacks and burritos. Next to their stand was a billboard advertising New Port cigarettes. The Americans named the village after that sign, which, translated into Spanish is Puerto Nuevo! 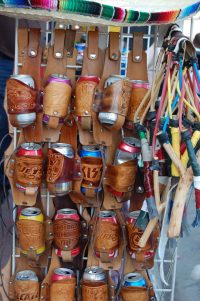